Sort, the small capital of the comarca, has 2,300 inhabitants and boasts its nature and the River Noguera Pallaresa as its main attractions. In this village, which is one of the key centres for adventure sports in the Pyrenees, you will find such interesting places as the Prison-Path to Freedom Museum. This museum forms part of the "Persecuted and Saved" project, which has been promoted by the Diputació de Lleida and remembers the routes via which Jewish refugees fled through Catalonia to escape persecution by the Nazis during the Second World War. It has also recently become famous for its lottery centre (La Bruixa d'Or), with many people stopping off there to try their luck. Without leaving the N-260, head southwards and, 28 km later, the same road will take you through a number of tunnels and on to La Pobla de Segur. This is a fast and winding road, but one that is easy to ride. It is also very absorbing, due to the natural charm of the setting, and you are sure to enjoy riding parallel to the River Noguera Pallaresa and at the tail of the Sant Antoni reservoir.

At La Pobla de Segur, a municipality in the comarca of El Pallars Jussà, you can stop to take on liquids and relax. Here, it is well-worth visiting the Art Nouveau style Casa Mauri and the River Rafters' Space, where you can discover who the rafters were, their history, and the difficulty of their work.

You will then cross this area from the north-east to the north-west, passing through its centre, as you follow the N-260, which shares part of its trajectory with the C-13. This road crosses through the centre of the village of La Pobla de Segur and when it reaches its southern end, and has crossed the River Flamisell, it follows the right bank of the river upstream, to Senterada and El Pont de Suert. You are recommended to follow the route along the N-260, but there is also the option of taking the L-503 into the Vall Fosca (Dark Valley) in order to enjoy its scenery, settlements and lakes, before arriving at the entrance to the Aigüestortes and Estany de Sant Maurici National Park (where a spectacular cable car can take you up to Sallente, at 1,770 m, and Lake Gento, at 2,154 metres in just 10 minutes). However, as this road is a cul-de-sac, you are recommended to return to the C-13 and to enjoy a 40 km stretch of well-surfaced road with pleasant curves on your way to Tremp, via various tunnels and the Sant Antoni reservoir. This is a magnificent road, but one that usually has quite a lot of traffic. 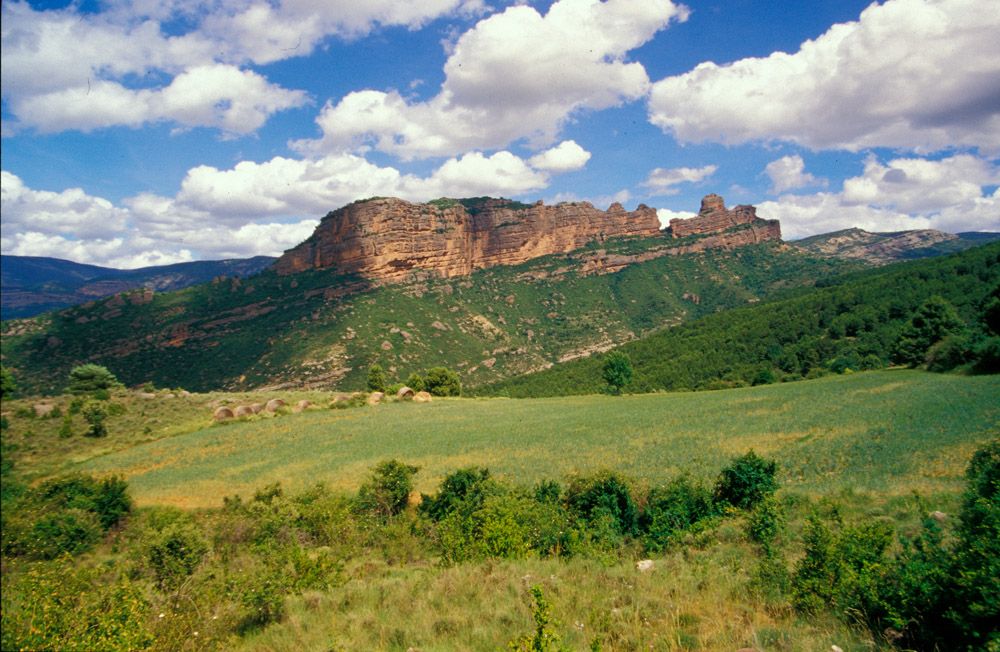 Tremp is the capital of the comarca of El Pallars Jussà and has around 6,300 inhabitants. The municipal area extends across the Catalan Pre-Pyrenees, from the River Noguera Ribagorçana water basin in the west to that of the River Noguera Pallaresa in the east. The central nucleus of this municipality is located on a small, raised plateau within the water basin of the same name, at 468 metres above sea level. The Tremp Basin, or Conca Deçà, is a natural district bordered by the sierras and mountains of Montllobar (1,125 m), Lleràs (1,678 m), Comiols (1,356 m), Sant Gervàs (1,834 m), Boumort (2,070 m) - with its rich fauna (including deer, chamois, vultures and bearded vultures) - and Montsec d'Ares (1,678 m).

Leave the C-13 and continue driving along the C-1412b for about 19 km on what is a quiet, well-surfaced road without too many curves. You will ride through several different municipalities before reaching Isona, a small settlement in El Pallars Jussà which is the capital of the municipality of Conca Dellà. The village stands at an altitude of 660 m, at the end of a ridge that opens out into the valley of the River Conques, occupying what is a strategically important point from the point of view of local communications and connections with the neighbouring comarques of La Noguera and L'Alt Urgell. At Isona, you will find the Museum of Isona-Cretaceous Park Museum and also the remains of the ancient Roman city of Aeso. From this settlement, you should then head on to Coll de Nargó. Turn left to cross this hamlet of fewer than 600 inhabitants and then continue along the L-511. This is a 40.75 km stretch of road that climbs up to, and then down from, the Coll de la Faidella pass, before again climbing to the Coll de Bóixols (1,380 metres), offering spectacular panoramic views until you arrive at Coll de Nargó. This is a very steep road (both on the way up and on the way down, whichever way you ride it) and one with numerous curves that call for a very good level of concentration and attention when you are travelling by motorbike. At Coll de Nargó (L'Alt Urgell), you will find the Romanesque church of Sant Climent and the "Dinosphere" Palaeontology Centre, where you can go on a 70 million year journey to discover how the dinosaurs used to reproduce. 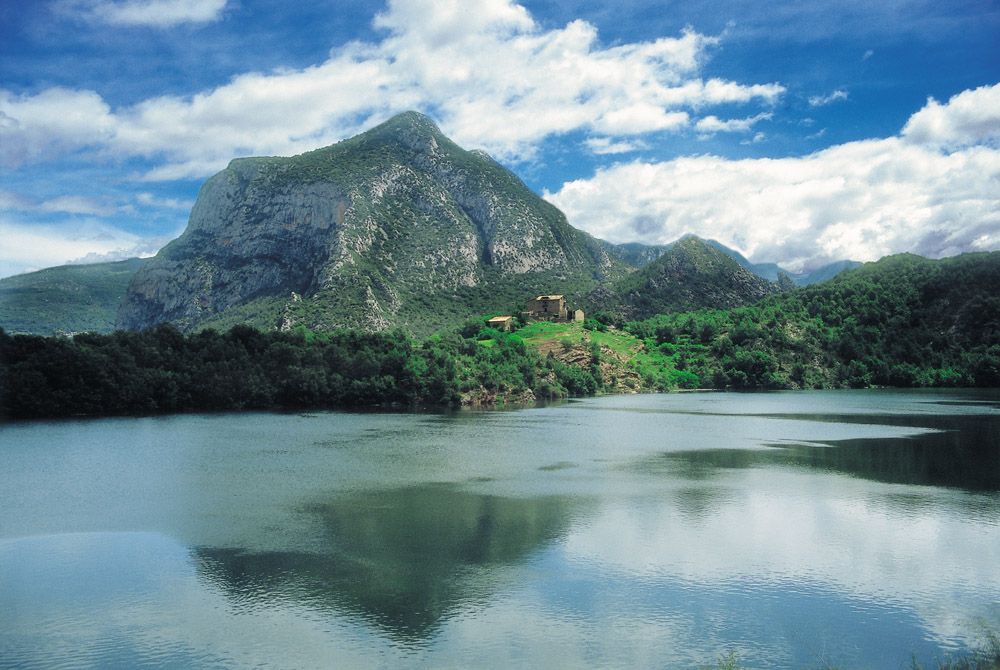 Turn off to the left before this municipality, when you reach the Oliana Reservoir and are crossing the River Segre, and follow the L-401, which will take you to Alinyà. The road will goes via the Coll de Boix pass to Linars and then via the Coll de Jou to Sant Llorenç de Morunys. This is a pleasant village that still conserves the five entrance gates to its historic walled enclosure and which - in a provisional space - houses the Museum of the Vall de Lord, which is located next to the magnificent cloister of the monastery of Sant Llorenç de Morunys. There are then 52 km of climbs and descents, reaching a maximum altitude of 1,509 metres, and numerous bends and panoramic views. The easternmost part of the municipal territory of Sant Llorenç is occupied by the waters of the Llosa de Cavall reservoir. You will pass the reservoir to your right (south) and then enter another area of valleys and Pyrenean landscapes, while continuing to enjoy this wonderful, although somewhat demanding, route. Follow the C-462 for about 21 km, until you reach the Nordic skiing area of Tuixent. This is at a village that sits on the southern slopes of the Sierra del Cadí, in the municipality of Josa i Tuixén, in the comarca of L'Alt Urgell. This peaceful area is nestled in the midst of a privileged natural environment. At the village, you will find the interesting Museum of the Trementinaires, which is dedicated to the women who used to collect "trementina" (a source of turpentine) and other medicinal plants that were used to treat medical conditions of all kinds. Without leaving the C-462, you should then continue northwards, following a rather tiring road with many curves. You will therefore need to concentrate on the final 52 km stretch which will take you to your final destination: La Seu d'Urgell. 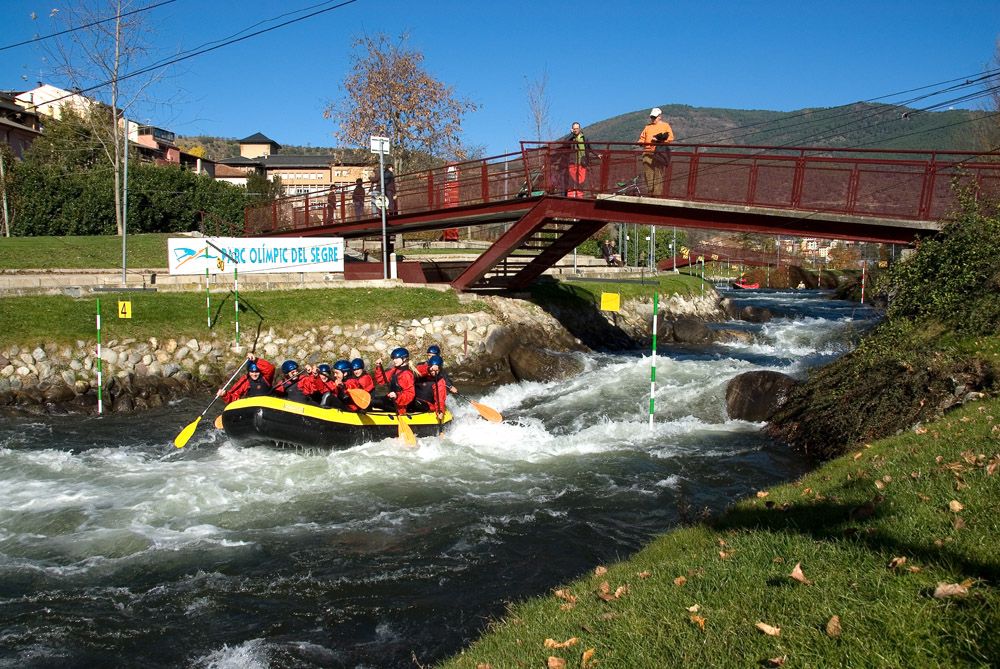 La Seu d'Urgell is a town with around 12,000 inhabitants, located in the Catalan Pyrenees. It is the capital of L'Alt Urgell, the seat of the Bishopric of Urgell, and was once the most important settlement in the ancient County of Urgell. Its most outstanding tourist attractions are its cathedral, which is the only Romanesque-style cathedral in Catalonia, and the El Segre Olympic Park. It is located at the confluence of the rivers Segre and Valira and L'Alt Urgell is also the gateway to the small mountain state of Andorra. In fact, its proximity to this important population centre and pole of economic activity to a large extent explains the current importance of La Seu d'Urgell within the area that includes L'Alt Pirineu (High Pyrenees) and Aran. La Seu d’Urgell has a number of establishments that are already well-known to motorcycle tourists. (PHOTO) Come and enjoy them!